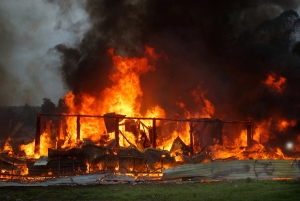 A prolonged drought and illegal fireworks can be a deadly combination as we head into the Fourth of July holiday, resulting in fires across California and Arizona. Property owners and municipalities are hiring security guards to prevent the use of illegal fireworks and to report fires immediately.

According to the National Fire Protection Association, 19,500 fires were started by fireworks in 2018 in the U.S. including 1,900 structure fires, 500 vehicle fires and 17,100 other fires. These fires resulted in $105 million in property damage. We’re experiencing much dryer conditions in 2021. People set off fireworks the beginning of June and the trend continues through July. Property owners aren’t taking any chances. They are hiring around-the-clock fire watch security teams to protect their property.

APS fire watch security guards have found that people will often try to launch fireworks in parks, open fields and empty parking lots where they believe they are far enough away from structures. They think they are being safe, but don’t realize that the fireworks launched into the sky remain hot, can travel long distances and start fires on roofs, in trees and in dry brush.

Large stashes of illegal fireworks that have been seized by law enforcement account for only a fraction of what’s available on the black market. This year’s already dangerous fire season means fire departments will be on high alert around the July 4 holiday but resources are stretched thin. Security guards fill in the gaps to protect property and vulnerable communities. Our fire watch security guards are assigned to retail centers, public parks, beaches, gated communities, schools and wherever a fire could cause substantial damage.

Guards are trained to keep would-be trespassers off properties. If they see fireworks being used, they’ll intervene. If a fire begins, guards respond using fire extinguishers and, when necessary, call 911. By the time the fire department can get to a property, it’s often too late. Severe damage is already done.