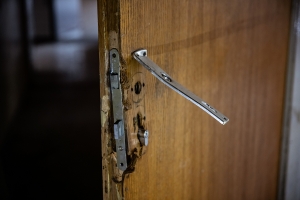 In the quest to try to outsmart burglars and to keep them from stealing our valuables, a 2016 NBC poll asked convicted burglars where they go first after breaking into a home. Seventy-five percent wrote that they go straight to the bedroom. If they had one room to steal from, the bedroom is their ideal destination. The COVID-19 isn’t stopping the most bold (and desperate) burglars.

What Burglars Look For. Eighty-four percent of those surveyed said they are after cash followed by jewelry (81 percent). A thief wrote that putting all your small valuables in one place makes it easy for them to grab and go. Larger items that can be carried out without too much trouble are also fair game.

What To Do If A Burglar Is In Your House. Most of the burglars who responded to the survey said that if they realized someone was in the home, they would leave, but if confronted, 40 percent said they would fight back. Those incarcerated burglars that NBC reporters spoke with directly said that burglars are usually armed. If a confrontation does occur, something bad could happen that could have been avoided if the homeowner would have left the scene or made enough noise to frighten the burglar away.

What Would Burglars Tell Their Moms To Prevent Theft?One of the questions on the survey was what would the burglars tell their moms to keep criminals away. Besides locking doors and windows, one piece of advice is to trim shrubs and bushes so as not to create a hiding place. Others said to keep travel plans to yourself and don’t brag on social media about expensive purchases.

Another suggested keeping a radio or TV on at all times. That way, the burglar won’t know for sure if someone is inside. Others suggested purchasing ring doorbells where you could communicate to someone at the front door through your cell phone. Seeing these types of devises will deter most criminals from trying to enter, burglars noted.

The final piece of advice—get to know those living around you and then look out for one another. Burglars hate nosy neighbors.

Home break-in statistics vary in severity from state to state. Arizona break-ins amount to almost 440 per 100,000 inhabitants while California is at 416 per 100,000 according to Statista.

Hiring a security guard company to make regular patrols to your property while you are away can also help.Guard companies can be retained to review security video in real time so if a trespasser is on the property they can respond immediately or contact the police.

To request a security quote for security guard protection in California and Arizona, give Access Control Security a call at 888-629-7648 or Click Here to Get a Quote.