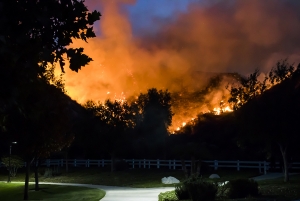 Looters have been caught breaking into empty homes in San Francisco-area communities where residents have been forced to evacuate because of current California wildfires. Looting is prompting some homeowners, homeowner associations and businesses to enlist the services of security guards to protect their property according to Access Patrol Services (APS), a firewatch security guard company serving San Francisco and counties across the Bay Area and northern California.

In Santa Cruz County, eight suspects were arrested for allegedly stealing items from homes near the CZU Lightning Complex fire. In another incident, looters took the wallet of a firefighter. He had left the wallet in his marked fire department vehicle.

Evacuees are worried that their homes may not be standing when they return. Now, they have to contend with thieves stealing their personal property.

When safe to do so, APS security guards patrol evacuated streets, homes and businesses, looking for suspicious activity. Looting is a crime of opportunity. Our guards’ presence will often deter looters, but if guards see someone trespassing or taking part in other criminal behavior, they will detain the individual until law enforcement arrives.

Guards monitor properties around the clock while owners are waiting for the fire department to give them the all clear to reenter. The property protection provides peace of mind during a very stressful time.’

We’re early into the fire season. We expect our California firewatch guards will be busy providing property protection in fire areas now until the rest of the year.

APS has been a post disaster security firm for over 25 years. Contact Access Patrol Services at 866-770-0004 with questions about security guard fire protection duties and responsibilities in California and Arizona or click on https://accesspatrolservice.com.