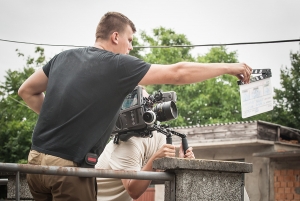 Film crews on location are becoming the target of robbery gangs, prompting the need for security guard protection.

A Canadian film crew was filming in San Francisco recently when a gang of robbers stole camera equipment at gunpoint. About $35,000 of equipment was lost including the cameras’ contents.

Film Crew Security. Security guards stand watch while a film crew is working. They patrol trailers and where equipment is stored. A guard will stand near the set and respond if someone tries to trespass. If an injury occurs, they administer first aid until help arrives.

With smash and grab thefts and robbery gang activity on the rise in major cities across the country, no business is safe. Film crews often use expensive equipment and it now appears they are becoming a new target for thieves. Much like smash and grab robbers, they can steal the items in a matter of seconds if no one is there to stop them. Much more than equipment is lost–a day’s worth of shooting or even more can be stolen.